A New Way of Thinking: Tankless Concept and Benefits 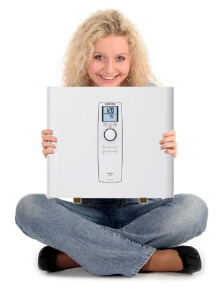 Tankless water heating systems were pioneered in Europe and Asia where they have been used for decades mainly as point-of-use heating systems. The concept was adopted in North America, but to a much lesser degree. Progressive manufacturers soon realized that with some critical modifications to increase power output and regulate temperature, the technology could be employed for whole house and commercial use as well. The modern tankless water heater, incorporating computer chips, an array of sensors, and high-power heating elements was born.

Tankless water heaters heat water entirely on demand, only when it is needed. When a hot water faucet is turned on and the water begins to flow, a sensor detects that hot water is being demanded. The technology on the market ranges from relatively crude "full on / full off" systems, to units with basic temperature controls, to units with advanced thermostatic or flow-modulating temperature control. While the manner of power and temperature regulation varies, the general concept is the same. When the flow of water is detected, the heating elements/heat exchanger are activated, the water flows across the internal heating elements or heat exchanger and exits the unit at the desired temperature. The start-up process takes a couple of seconds. In sophisticated systems like the Stiebel Eltron tankless water heater, sensors constantly monitor incoming water temperature and water flow rates and adjust the power output of the heating elements to maintain a precise output temperature as set by the homeowner. This is often referred to as "flow-modulation" although it is probably more accurately described as flow-based power modulation.

It is important to note that many manufacturers use relatively basic "modulation" to control their heaters, essentially only controlling how many elements turn on (most tankless water heaters have between 2 and 4 elements). As flow rates change, elements are turned on and off. This can often result in significant temperature fluctuations when applications of different flow rates are used or if the flow rate changes during use. Higher quality systems like the Stiebel Eltron tankless water heater will actually modulate power to each heating module, resulting in more precise temperature control.

The tankless water heater will remain on until the hot water faucet is turned off. As soon as the flow sensor detects that water has stopped flowing, the power to the unit is turned off completely. So when hot water is not being demanded, absolutely no energy is being consumed. The stand-by heating loss is completely eliminated.

Furthermore, since a tankless water heater has no refresh rate (it is instantaneous), there is no need to overheat the water to 130 or 140°F (or higher) as with a conventional tank. You can select an output temperature that matches your actually needs (usually about 105-110°F). This also saves considerable energy. For each 10°F reduction in water temperature, the U.S. Department of Energy estimates that you can save between 3%-5% in energy costs.

Being about the size of a briefcase (in the case of an electric tankless water heater), considerable space savings are also achieved. As a result, tankless water heaters can often be installed closer to the point-of-use, delivering hot water to the faucet faster. The extra space can be employed for storage, etc.

Tankless water heaters have far longer service lives than traditonal tank type heaters. Electric tankless water heaters typically last 20 to 30 years. Since there is no storage of heated water, they tend to be far less prone to hard water scale problems and since they maintain strong water pressure at all times, sediments do not settle out of the water and collect in the heater - they are washed right through.