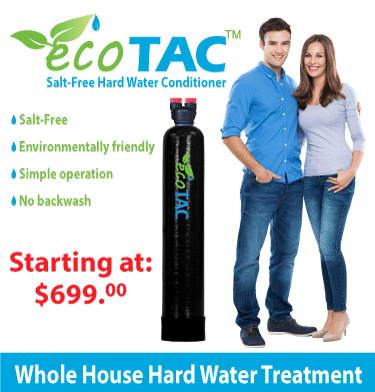 The principle behind Template Assisted Crystallization (TAC) technology is relatively simple - before hard water scale can form on its own and cause problems, use a catalyst to create a nano-sized scale crystal in a form that will not stick to surfaces.

TAC hard water conditioners use a highly specialized media consisting of polymeric beads that provide a preferable nucleation point for the formation of nano-crystals consisting of the building blocks of hard water scale before these minerals reach your water heater elements. The crystals grow on the bead until they reach a particular size and then break-off. These microscopic crystals are stable and remain suspended in the water flow instead of forming hard mineral scale on the surfaces in your plumbing system. This process is sometimes referred to as Nucleation Assisted Crystallization or NAC.

TAC technology was first employed as an alternative to conventional water softeners roughly 15 years ago in Germany. It was introduced to the U.S.A. and Canada about 7 years ago and is now gaining widespread acceptance. It is recommended by numerous tankless water heater manufacturers as their preferred form of treatment due to its effectiveness, reasonable price, compact size, and environmentally-responsible profile. It is widely considered the most effective salt-free hard water treatment technology.

The most rigorous accreditation standard for evaluating water softener alternatives for scale-reduction performance is the German Technical and Scientific Association for Gas and Water (DVGW) Standard W512. Testing of TAC treatment technologies under this standard has consistently proven the technology to be effective, with indications of scale reduction consistently greater than 90%, often approaching 100%.

An Arizona State University research paper examined alternatives to traditional domestic water softeners in an April 2011 study and confirmed these findings. The study concluded that TAC technology was, by a wide margin, the most effective hard water treatment alternative. The testing methodology used in this study was based on the German DVGW-W512 protocol and the study was primarily concerned with evaluating the ability of various technologies to reduce scale formation; this, of course, is also the primary objective when assessing a technology's ability to prevent mineral scale build-up in a water heater. Four water samples (2 sources and 2 temperatures) were used in the study's tests with feed water hardness ranging from 180 to 250 mg/l (ppm). TAC reduced scale formation by 88% to 97%. This study uses the exact TAC media that we use in our ecoTAC Protector Series water heater filters.

for flow rates up to 6 gallons per minute - salt-free, environmentally-friendly filter designed to reduce the harmful effects of hard water on your tankless water heater

for flow rates up to 6 gallons per minute - salt-free, environmentally-friendly filter designed to reduce the harmful effects of hard water on your tankless water heater

for flow rates up to 4 gallons per minute - salt-free, environmentally-friendly filter designed to reduce the harmful effects of hard water on your tankless water heater